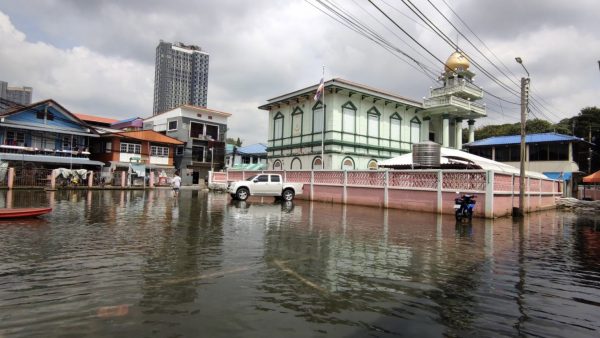 The rising pressure of water in Pimon Racha Canal, which connects with the swollen Chao Phraya River, caused a breach in a temporary embankment in Phimon Racha sub-district of Nonthaburi’s Bang Bua Thong district, flooding many areas and communities.

About 100 district and municipal officials and construction workers were mobilised last night to close the gap in the embankment, using piles, sand bags, wooden planks and canvas sheets.

Last night that they succeeded in closing about 80% of the gap, allowing water to flow into Toh Mai Canal from the swollen Pimon Racha Canal.

Meanwhile, about 1,000 households in a Muslim community in Tha It sub-district, in Nonthaburi’s Pak Kret district, have been affected by severe flooding for several weeks, forcing many residents to move to the upper floors of their houses.

A team of Thai PBS reporters went to the community and reported that most people who are still at home are children and the elderly, because it is very difficult for them to leave.

The average depth of the floodwater in the community is about 50cm.

Most flooding is expected to ease in mid-November, according to the Department of Public Disaster Prevention and Mitigation.