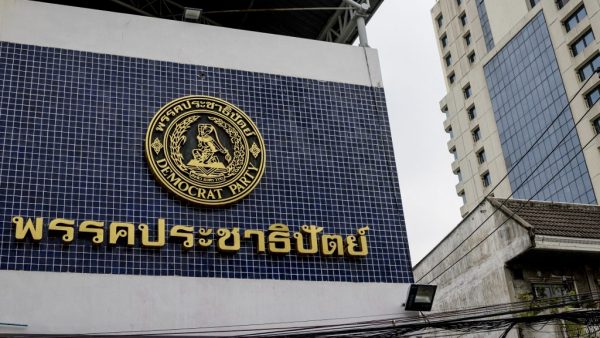 This picture taken on April 18, 2022 shows the exterior of Thailand’s Democrat Party headquarters in Bangkok. (Photo by Jack TAYLOR / AFP)

The Democrat Party, Thailand’s oldest political party, has been dealt another blow with the resignation of one of its most senior members Trairong Suwankiri on Thursday.

Trairong, an advisor of the party, gave no reason for his resignation but said in a Facebook post that he decided to quit “despite my love for the Democrat Party”.

Trairong is only the latest veteran politician to quit the Democrat Party. It’s not immediately clear whether he will join another political party despite speculation that he has been courted by Ruam Thai Sang Chart, a new political party set up by supporters of Prime Minister Prayut Chan-o-cha.

The 78-year-old veteran politician admitted that there are a number of political parties that have sought his political counsel but stopped short of making any commitment.

In his political heyday, Trairong was one of the country’s most colourfulpoliticians, holding a range of political portfolios, including deputy prime minister, industry and finance ministers.

During many of his 38 years with the Democrat, Trairong held many high-ranking posts in the party, including deputy leader.  He was known for his outspokenness and political wits.

The Democrat Party under the leadership of Jurin Laksanawisit, who also serves as deputy prime minister and commerce minister in the current administration, has suffered a string of defections in the past several months.

Many of the defectors have joined Ruam Thai Sang Chart, a political party widely seen as a vehicle for Prime Minister Prayut to enter the next general elections.