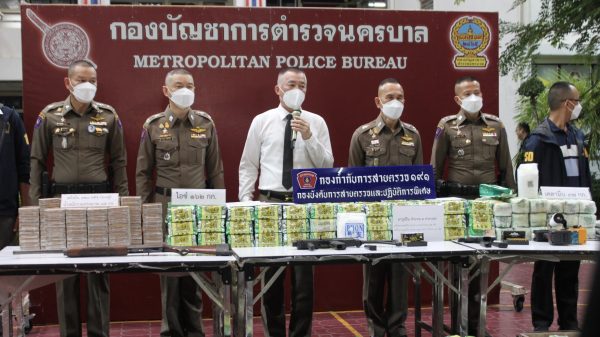 In the first, a police unit was dispatched to a gas station in Maha Sarakham province, after they were informed that a large haul of meth pills was to be smuggled across the border from Laos, via Mukdahan province and through Roi Et Province, to Maha Sarakham.

They arrested three men and seized the two handguns in their possession. A thorough search of the two vehicles uncovered four million meth pills.

In the other incident, police stopped a vehicle in Roi Et province for a search, which uncovered about six million meth pills. The two men in the car, who were taken into custody, allegedly told the police that they received the drugs in Nakhon Phanom, to be delivered to a customer in the central province of Ayutthaya.

Police claim that all the drugs belong to two major drug trafficking gangs operating in the north-eastern region, which have long been smuggling illegal narcotics from Laos fordelivery to customers in the central provinces.

Police seized about 825kgs of crystal meth (Ice) from one of the gangs last year and in 2019.