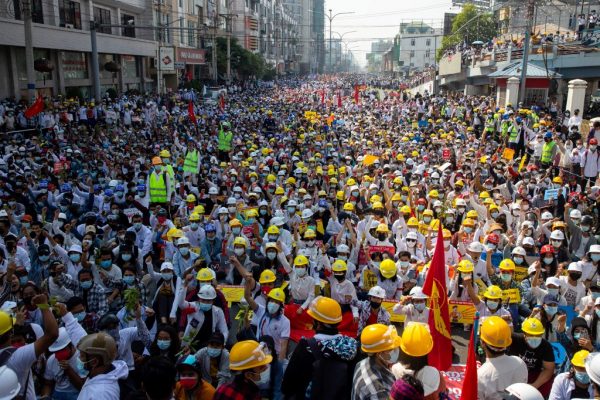 The upcoming ASEAN foreign ministers’ emergency meeting is expected to result in drastic recommendations and an effective strategy to implement the five-point consensus to resolve the ongoing crisis in strife-torn Myanmar, experts say.

The ministers are scheduled to meet on October 27at the ASEAN Secretariat Office in Jakarta to discuss a variety of options to enforce the accord reached in April last year.

Many solutions are being floated, ranging from reviewing the five-point consensus, engaging with the opposition, appointing a permanent special envoy, and even suspending Myanmar’s ASEAN membership, said retired diplomat Kobsak Chutikul, who monitors Myanmar issues closely.

More than 2,300 people have been killed since the military takeover, according to rights group the Assistance Association for Political Prisoners (AAPP). The United Nations High Commissioner for Refugees (UNHCR) has reported that more than a million people have been displaced internally and about 70,000 have fled violence and military clashes to neighboring countries since the coup.

ASEAN has desperately sought ways to end the crisis after its efforts to implement the five-point consensus yielded no fruit. ASEAN foreign ministers, in a joint communique issued on August 3 after their annual meeting, said they were “deeply disappointed by the limited progress in and lack of commitment of the Naypyidaw authorities to the timely and complete implementation of the Five Point Consensus”.

The ministers recommended that the ASEAN Summit due on November 10-13 in Phnom Penh assess the progress that the Myanmar junta – officially known as the State Administration Council (SAC) – has made towards implementing the consensus to guide ASEAN’s decisions on the next step.

ASEAN foreign ministers, with the exception of a SAC representative, met last month on the sidelines of the United Nations General Assembly in New York but failed to come up with any concrete ideas to deal with the Myanmar crisis. The upcoming special meeting in Jakarta is needed as Malaysia and Indonesia now want to put forward new ideas to resolve the crisis.

“The group needs to be more open as its conventional approach has not worked,” Korbsak told Thai PBS World in an interview recently.

The Myanmar junta chief agreed to the five-point consensus at a summit in Jakarta on April 24 last year. The consensus calls for an immediate end to violence, dialogue among all parties, the appointment of a special envoy, humanitarian assistance by ASEAN, and a meeting between the special envoy and all disputants in the country.

But rather than allowing the military regime to choose the meeting’s venue and participants, the ASEAN envoy should engage directly with the opposition and ethnic armed organizations along Myanmar’s borders, said Thammasat University academic Dulyapak Preecharush.

“Next month’s meeting should primarily focus on humanitarian assistance to people affected by the violence and armed conflict,” he said, adding that meetings with the opposition and refugees along Myanmar’s borders with Thailand, Bangladesh, India and China will give ASEAN insight into the situation on the ground.

Dulyapak added that it may be difficult to implement the first point in the consensus – immediate cessation of violence – because all factions are waging war against each other.

“Instead, ASEAN should employ a piecemeal approach beginning with less sensitive issues, to explore possibilities for all parties to start talking,” he said.

Given that the junta’s military operations and airstrikes, notably in remote and border areas, cause serious destruction, the ASEAN should also consider a new strategy to get the regime to ease the violence and tension, he said.

“Engaging the National Unity Government and ethnic armed organizations will help empower the opposition for negotiations,” said Dulyapak, who is an associate professor of Asian Studies at Thammasat University.

Kobsak, meanwhile, suggested that ASEAN should choose a non-ASEAN national as its full-time special envoy to Myanmar, replacing the current officeholder. Cambodia, which holds the rotating chairmanship of ASEAN this year, chose Foreign Minister Prak Sokhonn to replace Brunei’s 2nd Foreign Minister Erywan Yusof in the post. The Cambodian minister, who suspended his third visit to Naypyidaw, has admitted to having a limited mandate and struggling to implement the five-point consensus effectively.

The group would be better off choosing a non-ASEAN national to avoid conflicts of interest and he or she should have longer than a year to work, Kobsak said.

“My idea offers ASEAN an opportunity to choose a candidate who fits the job and is sensitive to the complexity and unique characteristics of the conflict in Myanmar,” he said.

The chair Cambodia and its envoy have made no progress over the past year because they have sought a compromise between ASEAN’s opposing pro-interventionist and pro-sovereignty camps, Dulyapak said.

Indonesia, as ASEAN’s next chair, may take a tougher stance towards the SAC as Jakarta considers this regime illegitimate, he said.

Min Aung Hlaing has likely prepared for the new ASEAN chair, as he announced a new election in August next year along with his own peace process to deal with junta-friendly ethnic armed groups, the scholar added.

While Thailand is expected to play a crucial role in helping effective implementation of the five-point consensus, Kobsak said its government’s quiet diplomacy could only work if Thailand had real influence over all parties concerned.

The diplomatic corps doubt if the Thai special envoy, appointed in late April, has contributed anything to ASEAN’s efforts to end the crisis. The special envoy, when it comes to quiet diplomacy, should have the caliber to convince the junta to cooperate with ASEAN or at least stop the violence along the border with Thailand, he said.

While the Thai government wants to maintain good relations with its Myanmar counterpart, Dulyapak suggested that engagement with the opposition, including the parallel National Unity Government and ethnic armed organizations, should be an alternative.

“More policy platforms for other stakeholders would make Thailand’s policy towards Myanmar more flexible as well as provide protection for conflict-afflicted civilians along the border,” he said.

Unlike Thailand, Malaysia has implemented several alternatives and called on other ASEAN members to engage with Myanmar’s opposition. However, the dissolution of the Malaysian parliament for an election and its deportation this month of 150 Myanmar nationals including six defectors will likely undermine its tough stance against the junta.

Philippine President Ferdinand Marcos Jr said early this month that he will propose concrete steps at the upcoming summit to bring the junta to the table to address conflict in Myanmar.