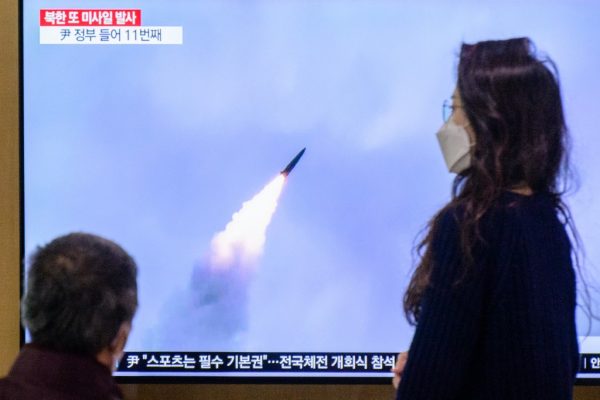 People watch a television screen showing a news broadcast with file footage of a North Korean missile test, at a railway station in Seoul on October 9, 2022. (Photo by ANTHONY WALLACE / AFP)

A North Korean merchant vessel crossed what is known as the Northern Limit Line at 3:42 a.m. but retreated northwards after the South’s navy fired warning shots, South Korea’s Joint Chiefs of Staff said, according to the Yonhap news agency.

Pyongyang’s Korean People’s Army claimed a South Korean military vessel had “invaded” the de facto border by 2.5 to 5 kilometers (1.5 to 3 miles) a few minutes later and that the KPA fired 10 warning rounds from the country’s west coast.

KPA “coastal defence units on the western front… took an initial countermeasure to powerfully expel the enemy warship by firing 10 shells of multiple rocket launchers toward the territorial waters, where naval enemy movement was detected, at 5:15,” a KPA General Staff spokesman said in a statement.

“The KPA General Staff once again sends a grave warning to the enemies who made (a) naval intrusion in the wake of such provocations as the recent artillery firing and loudspeaker broadcasting,” he added.

The maritime border is considered a flashpoint and has been the location of several clashes between the two Koreas over the years.

Tensions have soared in recent weeks, with the North conducting several missile launches and artillery barrages that have provoked South Korea and Japan and worried their Western allies.

Pyongyang has dramatically ramped up its military exercises recently as Seoul and Washington say North Korean leader Kim Jong Un is close to conducting what would be his country’s seventh nuclear test.

Monday’s exchange of warning fire comes on the same day that US Deputy Secretary of State Wendy Sherman is to hold three-way talks with allies Japan and South Korea in Tokyo in a show of unity after the North’s slew of launches.

Pyongyang has described the exercises as “tactical nuke” drills.