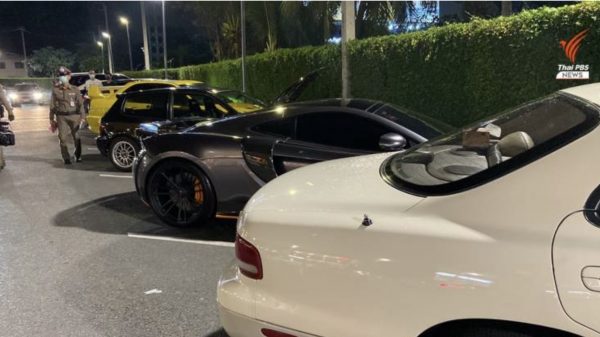 Street car racers in Thailand are warned that they may face imprisonment and hefty fines if more than five of them gather together for illegal races, even if they have not started racing, said Pol Col Prasobchoke Iamphinit, superintendent of Prachachuen police station.

The police officer, accompanied by officials from the Land Transport and Excise departments, went to a gas station near the Prachachuen toll plaza late last night (Saturday), after they received complaints from residents in the neighbourhood of a deafening noise, caused by car engines at the gas station.

The officials checked the engines of several cars and found some of them had been modified for racing and a few of them lacked license plates.

He said that the car owners were not arrested, but were warned and had their names recorded by police, adding that some drivers, believed to be potential racers, immediately left the gas station upon seeing the officials.

Under amended traffic rules, which came into effect on September 5th, authorities are empowered to take legal action against street racers if they gather in a group of more than five.

The penalties are prison terms of not more than three months and/or a fine from 5,000-10,000 baht on conviction.