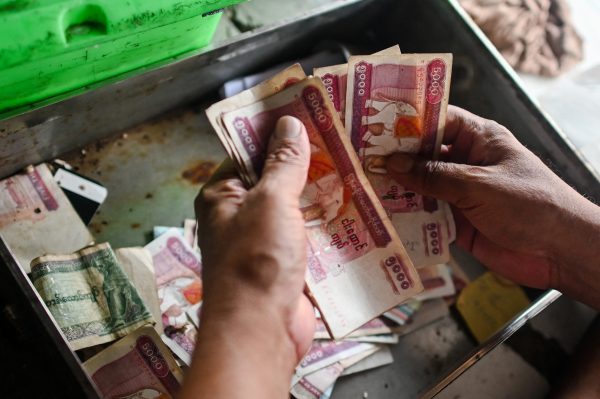 A shopkeeper counts the Myanmar kyat currency at his shop in Pazontaung market in Yangon on March 21, 2020. (Photo by Ye Aung THU / AFP)

The France based Financial Action Task Force (FATF) officially placed Myanmar on their Black List, saying that the post-coup administration was unable to comply with theirsuggestions. Myanmar was already on their Grey List.

As news broke, panic swept through social media, reaching a peak in the following days.

The value of the Kyat

“I’ve seen people calling for ridiculous rates, such as Ks6,000 per USD. It is mainly concentrated on the USD now but, since it is a problem caused by people speculating that the value of Kyat will drop even further, it is also slowly pushing up the value of other currencies, such as the Baht,” said an importer that deals mainly in Thai-made products.

While it could be said that the increase in the Baht and other currencies, such as the Chinese Yuan, is marginal, it is only so due to doubling of Kyat per dollar rates.

“It’s mostly hogwash. People are quick to panic, but for good reason. Such a pattern had occurred many times. It is still the weekend, so we have to see next week’s market opening. My foreign currency contacts tell me that the value is still tentative at Ks3,200 per dollar. No one is actually buying or selling,” said a used laptop store owner.

“It might not be anything, or it could be or everything. Either way, while fuel prices did not spike immediately, you can see long queues at stations that are still selling. Some decided to just stop their service,” said a taxi driver in Yangon.

“Apart from things like humanitarian aid, businesses like ours are going to come under much scrutiny. At best, that’s going to slow down anything that requires regular transactions with banks. It isn’t going to be immediate and may take some time to ramp up, but we have to prepare for the worst,” said the Thai-import distributor.

“The worst fear for me is that it is going to be impossible to do digital-based businesses. We have to think of the worst-case scenario, because it’s going to get worse. Maybe just higher charges for now, but soon enough there will be a lack of correspondent banks and so on. What happens when legitimate ways are difficult? The black market thrives, which will, in turn, attract even more attention from entities dealing with things coming into and going out of Myanmar,” said a Digital Marketing Agency senior staff member.

“I don’t understand much about it, but I know that it’s bad. I needed to buy another phone, because mine was pickpocketed from me the bus. I have had to save up for a while now,because even budget phone brands and models are almost unattainable now. I was going to buy today or tomorrow, but the store I planned to buy from just flat out stopped selling anything. They didn’t raise the price. They just stopped because, I suspect, either the profits or the losses are too great, due to the exchange rate,” said a young man in his 20s at a beer bar in Tamwe Township.