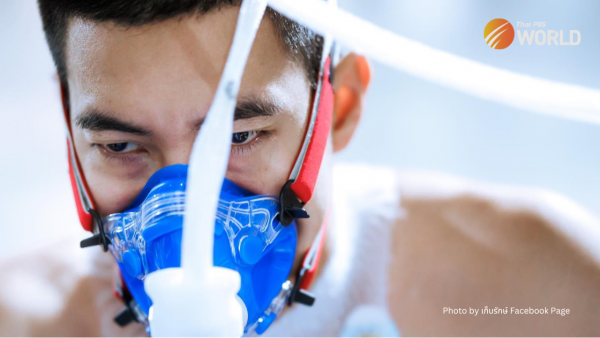 Tomorrow (Oct 22), singer-cum-actor Phakin “Tono” Khamwilaisak will brave strong criticism – and even stronger currents of the Mekong – in his bid to swim across the border on his “One Man and the River” charitable mission.

“My causes mean so much more [than the hurtful flak],” an emotional Tono said earlier this week after his swimming challenge sparked controversy on social media.

Over the past month, the 36-year-old heartthrob’s charity swim has raised more than 6 million baht for two hospitals on either side of the Mekong – one in Thailand’s Nakhon Phanom and the other in Laos’s Khammouane.

So what’s the fuss all about?

But Tono’s good intentions have not been enough to save him from a wave of criticism. Some critics warn that his mission is dangerous in a Mekong whose ferocious currents have been swollen by monsoon rain. The daredevil swim puts not just his own life at risk, but also those of the rescue team on standby in case he gets into trouble, they say.

Meanwhile it also adds to the burdens of agencies who have come forward to help him prepare, claim others.

His detractors say that if Tono really wants to help hospitals, he should do so with his own money rather than public donations. They also accuse him of trying to grab the media spotlight and insist he should cover the costs himself.

Even some of his fans find the Mekong swim insensitive, pointing out that his former girlfriend Pataratida “Tangmo” Pacharawirapong drowned in the Chao Phraya River only eight months ago in February.

Tono’s mission follows well-publicized charity runs by rock star Artiwara “Toon Bodyslam” Kongmalai. In 2017, Toon’s run across the length of Thailand from the southernmost to the northernmost tip raised 1.3 billion baht for 11 hospitals and transformed him into a national hero.

However, things have changed since then. Charity events led by stars like Toon and Tono are commonplace now and praise for their heroic efforts has faded. The public, jaded by so many fund-raising activities, has grown tired of the charity missions used to drum up donations.

And as political debate deepens, many people think celebrities should be speaking up on issues like transparency, reform and public policies rather than grabbing media attention with charity stunts.

Though most Thais think the government should feel the heat for providing inadequate supplies at state hospitals and schools, charity stunts by celebrities have sparked much flak. Late last year, Toon was slammed for his 59-day run for schools, with many of his critics saying he would have been better off using his celebrity status to push for a change in the government’s policies.

Born in the Northeast province of Khon Kaen in 1986, Tono was named after his boxer father’s ring name. When Tono was just nine, his dad died and left behind a mountain of debt.

Rather than complaining about the burden left by his parent, Tono rose to the challenge and picked up all kinds of part-time jobs to earn extra cash. He got his break in showbiz when he joined “The Star” singing contest in 2010 and emerged as second runner-up. Since then, he has released several albums, performed at countless concerts and appeared in a string of TV series and movies.

With a successful career, Tono now has more than enough to support himself and his family, and has been able to indulge his passion for sports, environmental causes and other charity missions.

In 2019, he initiated the “One Man and the Sea” swim to combat pollution by single-use plastic. The mission, which saw him swim between 12 islands, was a big success and he was named the Sustainable Ocean Ambassador at the UN Ocean Conference that same year.

Last year, he was recruited by Thai Premier League team Ratchaburi FC but was given only 12 minutes of playing time before being dropped by the club.

Tono is now dating actress Nuttanicha “Nychaa” Dungwattanawanich, who has thrown her support behind his “One Man and the River” mission.