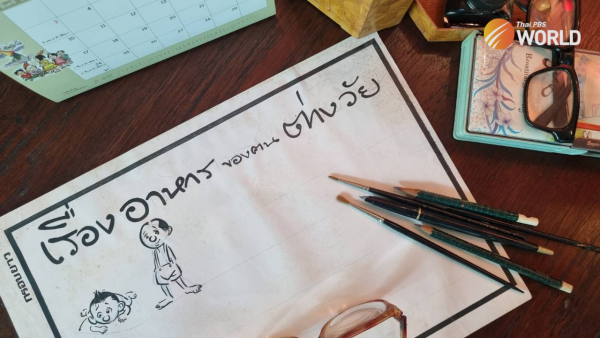 A series of cartoon strips in a mass-circulation newspaper debut 50 years ago and books from 1976 “Kabuan Karn Gae Jon” (Anti-Poverty Club) remain highly popular among fans of Thai cartoon series and the books have become rare used-book items that are sought after by book lovers.

Written by Prayoon Chanyawongs named as The King of Thai Cartoon, Kabuan Karn Gae Jon was not only a treasure of local wisdom on food and agriculture, it inspired and encouraged the poor people to be aware of self-sufficient living.

In an effort to translate the 2 dimensions of black and white iconic cartoons into the modern day, the non-profit organization Prayoon Chayawongs with funding support from Thai Media Fund (TMF) will be launching the first animated TV series from November 5, 2022. The 30 episodes will be aired on Thairath TV every Saturday at 10.55 am – 10.57 am and Sunday at 10.51am – 10.53 am, the best times for families, kids, and young people to watch.

Sooklek Chanyawongs, vice president of Prayoon Chanyawongs Foundation, said that Kabuan Karn Gae Jon has been produced in a new medium form and adapted to gain the audience’s attention and engage the children. In addition to the main character “Sooklek”, new characters named Sukhee, Kham La and a dog “Dang” are added to make fun. My father (Prayoon) transferred his long-life experience and soul into Sooklek character who represents simply living with a principle of self-sufficiency and perseverance.

“The foundation chose cooking as a title for the first animated TV series, allowing viewers to learn many tips of Thai cooking recipes and culture. For example, many new generation might not know why we have to take off shoes before offering food to the monks. There are 8 topics of Kabuan Karn Gae Jon that recommend people to fight against the poor including Gin Gae Jon (Eat to live), Soo Jon Duay Pla (Fight against poverty with fishing), Thanom Aharn Gae Jon (Preserve food to solve poverty), and Plook Ton Mai Gae Jon (Plant to eradicate poverty),” said Sooklek.

While, Dhanakorn Srisooksai, chief executive officer of the Thai Media Fund, said that he is among fans of Kabuan Karn Gae Jon cartoon series which is considered as one of the best safe and creative media. The creation of animated TV series is an alternative way to acknowledge useful information.

“Not just TV cartoon animation, people will be able to watch Kabuan Karn Gae Jon animated series via our YouTube, Facebook and TikTok, offering convenient access to all. After ending the first series, it is possible to further support the creation of other titles,” said Dhanakorn.

Dhanakorn added that with an overwhelming amount of misinformation and fake news, people now are seeking for safe and creative media. Besides funding granted to various organizations, TMF also started to produce its movies as an alternative for people to watch safe and creative content.

Prayoon Chanyawongse, 23, started drawing cartoons of traditional Thai literature in late 1938 and became a full-fledged cartoonist with a comic series in the Likay style of Thai folk musical drama. He won the first prize of the International Cartoon for Peace Competition in New York in 1960 for his editorial cartoon entitled The Last Nuclear Test. Later in 1971, he also was granted with the prestigious Ramon Magsaysay Award for Journalism, Literature and Creative Communication Arts for his use of pictorial satire and humor for over three decades in unswerving defense of the public interest.

In 1997, Assoc. Prof. Wittayakorn Chiangkul headed a research project for the “100 books that The Thai people should read” selected a variety of book genres published between 1862-1976, which Kabuan Karn Gae Jon was one of the must-read book.

Today, the legacy of Prayoon Chanyawongs who passed away 30 years ago remains in the hands of the fans who love his work.