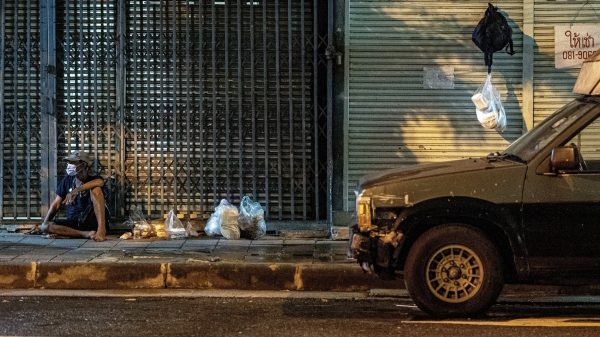 More shelters are to be built for homeless people in Bangkok and more jobs opportunities will be made available to them, particularly for those who have recently become homeless, to improve their quality of life and to reduce homelessness, according to Deputy Bangkok Governor Sanon Wangsrangboon.

The deputy governor chaired a meeting of city officials and representatives of non-governmental organisations and relevant agencies yesterday (Wednesday), to discuss homelessness in Bangkok and to develop ways to find shelter and jobs for them, so they can earn incomes and pursue a normal life.

Among the agencies that took part in the meeting were the Employment Department, the Social Development and Welfare Department, the National Health Security Office, theInstitute of Asian Studies at Chulalongkorn University, the Mirror Foundation and the Somdet Chaopraya Institute of Psychiatry.

If jobs can be provided to the newly homeless, he said that these people will gain a greater chance of having their own shelter and pursuing a normal life.

He said that the first priority, however, is to provide temporary shelters for the homeless. One potential site for the building of another shelter is under the expressway near Maha Phruttharam Temple, in Bang Rak district. This would be in addition to the existing shelters, at the foot of Phra Pinklao Bridge, Hua Lamphong railway station, on Ratchadamnoen Road and at Trok Sake, which are jointly operated by variousnon-profit foundations.

The deputy governor said that homeless people also need rehabilitation and jobs, adding that certain rules have to be eased to help them find employment.

Employment, he said, is a means to solve homelessness in the long run because, once they are employed and have incomes, they will have a better chance of improving their lives and may not become homeless again.

He admitted, though, that solving the problem is an uphill task and it requires public participation, adding that members of the public should not view homeless people as a social burden, but as people who are in need of help instead.