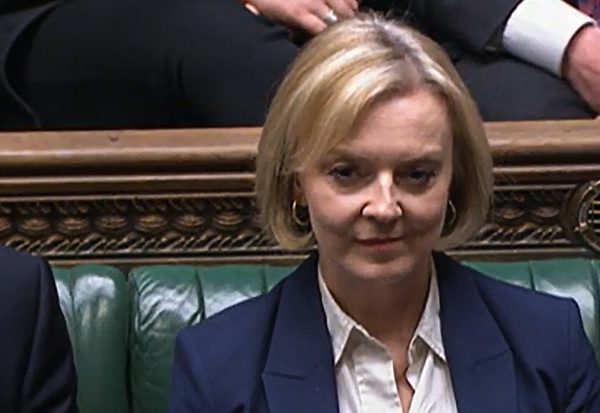 British Prime Minister Liz Truss is set to address lawmakers in parliament on Wednesday for the first time since abandoning her tax-slashing economic agenda, as she seeks to reassert her waning political authority.

Truss is set to face hostile questions from Tory as well as opposition MPs in a likely febrile House of Commons, less than 48 hours after new finance minister Jeremy Hunt dismembered her flagship tax plans.

The beleaguered leader has already seen at least five Conservative colleagues call for her to be replaced, as she fights for political survival.

Polls show her personal and party ratings have cratered dramatically, with YouGov saying Tuesday that — within six weeks of taking power — she had become the most unpopular leader it has ever tracked.

A separate survey of party members found less than two months after electing her Tory leader and prime minister, a majority now think she should go.

Meanwhile, the main Labour opposition has opened up huge poll leads over the ruling Conservatives, amid the recent fallout as well as the worsening cost-of-living crisis.

More than three-quarters of people disapprove of the government — the highest in 11 years, YouGov said.

The government’s September 23 mini-budget — which slashed a host of taxes without curbing spending — sent bond yields spiking and the pound collapsing to a record dollar-low on fears of rocketing UK debt.

After appointing Hunt as his successor, she agreed to further reverse course, axing almost all the other cuts and rowing back on an energy price cap for consumers.

It was set to last two years, but will now end for many next April.

During the summer leadership campaign which saw Truss beat former chancellor of the exchequer Rishi Sunak to succeed ex-premier Boris Johnson, she vowed not to reduce public spending.

But after the economic tumult of recent weeks saw government borrowing rates spiral, Truss and Hunt have warned of “difficult decisions” and urged government departments to find savings.

Opposition parties are demanding she stand down and a general election — not due for two years — is held.

“We can’t go on like this, shutting the public out,” Labour leader Keir Starmer told BBC radio.

“Many people now feel that the real risk now is carrying on with this lot.”

Under current party rules Truss cannot be challenged by a no-confidence vote in her first year, but speculation is rife the rules could be changed to allow for a ballot.

Conservative lawmakers so far have failed to coalesce around a contender to replace her, with Johnson and Sunak both touted but each likely to draw significant opposition from factions within the party.

More than half polled by YouGov had an unfavourable opinion of Sunak, rising to nearly two-thirds for Johnson.

Truss apologised for going “too far and too fast” in her government’s mini-budget in a BBC interview Monday —  as well as insisting she was going nowhere.

But there are daily reports of plots by her own MPs to oust her, as even right-wing newspapers ditch their support.

“She holds the seal of prime ministerial office — but only by her fingertips,” the Daily Mail’s editorial said Tuesday.

“Her authority and credibility are as good as shot. The sharks in her party have smelled blood — and circle menacingly.”