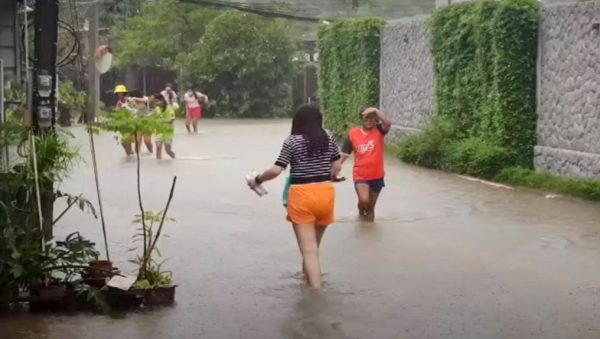 Residents living along the Bang Yai Canal, in Nakhon Phuket and Ratsada sub-districts, have been advised to prepare for overflows, following the last three days of continuous heavy rain in Phuket province.

Combined rainfall so far this week has been measured at 610.8mm, with 224.7mm in Thalang district, 188mm in Krathu district and 198.10mm in Muang district. The water level in the Bang Yai canal is, however, still below its banks, but is rising steadily.

Meanwhile, the Nakhon Phuket Municipality has opened four venues at which flood victims can seek help until next Monday, from 8.30am until 8.30pm.

Public disaster prevention and mitigation officials and troops have built a temporary crossing, after a bridge over the Bang Niew Canal was damaged by strong currents and is being repaired.

Phuket Governor Narong Woonsiew said that the current flooding is having a considerable impact on the province, especially in the commercial area. He hopes, however, that flood water will be drained out of the commercial district soon, providing that there is no more heavy rain.