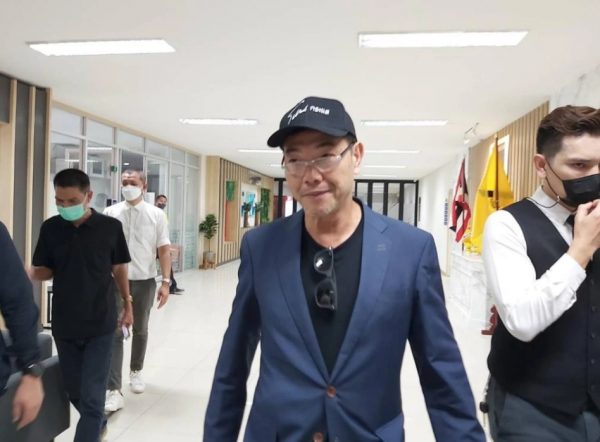 Donations continue to pour into a bank account, opened by a supporter of the man who attacked Srisuwan Janya yesterday, to be used for his legal defence.

The man, 62-year-old Veerawich Rungruangsiriphol, physically assaulted Srisuwan as he was giving an interview to the media prior to submitting a petition to police at the Technology Crime Suppression Division (TCSD), seeking to take legal action against stand-up comedian Udom Taephanich for allegedly inciting public protests.

Veerawich was arrested in the car park of Channel 3 TV on Rama 4 Road today (Wednesday), as he was about to appear on the popular program “Hone Krasae”. He was then escorted to the Crime Suppression Division (CSD) for questioning.

Pol Col Anek Prasuparb, deputy commander of the CSD, told the media that the arrest of Veerawich has nothing to do with the assault on Srisuwan, but concerns a case last year in which the man was accused of assaulting Seksakol Atthawong, former vice minister attached to the Prime Minister’s Office. A warrant for his arrest was issued by the court.

Before his attack on Srisuwan yesterday, Veerawich had livestreamed, via the “Sakdina Sua Daeng” YouTube channel, about his plan to assault Srisuwan to “teach him a lesson”.

After the attack, he returned home to resume his livestream, saying that he decided to carry out the attack because Srisuwan had threatened to lodge complaints against anyone who takes to the streets to protest against the Constitutional Court’s ruling on Prime Minister Prayut Chan-o-cha’s 8-year term in office.

He claimed that, during the second livestream, many of his supporters offered him moral support and made donations to his legal defence fund.

The brazen incident has triggered mix reactions, with his supporters offering him moral support and donations, while his opponents are criticizing his use of violence to settle scores.

A YouTuber, who showed up at the CSD, this afternoon said that about 300,000 baht in donations have been wired into the bank account for Veerawich, but he admitted that the amount might not be enough, because there are numerous cases pending against him in court.

Among his supporters at the CSD was Aekachai Hongkangwan, an anti-establishment protester who is on bail after serving five months in prison for violating the Computer Crime Act.